Brains, Music, and The Bad Plus 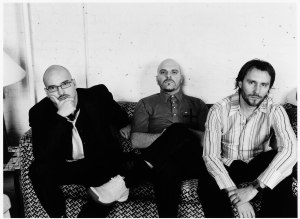 A lot has been written about the neuroscience of music lately, including these two articles in the NYTimes, a blog post by Jonah Lehrer, books by Oliver Sacks and Daniel Levitin, and a paper in Nature Neuroscience. What are they all saying? To get a sense, meet The Bad Plus, a Minneapolis trio known for a unique brand of rock infused Avant-garde jazz music. The Bad Plus have been around for just over a decade and have made a name for themselves by covering famous hits from the 80s and 90s – everything from Blondie’s ‘Heart of Glass’ to Nirvana’s ‘Smells Like Teen Spirit’ – as well as producing original material.

If you have ever listened to The Bad Plus you will know that their music can be a bit challenging. Instead of the standard verse-chorus, 4/4 time structure that most pop songs are constituted by, Bad Plus songs are much more chaotic. Often switching from one unusual time signature to the next (5/16 to 3/4 to 10/8 for example), speeding up and slowing down the tempo, and rarely repeating previous motifs, their songs could be classified as lawless. However, beneath all the disorder, The Bad Plus nonetheless maintain a deep and steady structure that binds all of their songs together – and this is what makes them successful musicians.

It is their ability to combine what we expect with what we don’t expect that separates them from most. Sometimes this is frustrating, and other times it is confusing, but it is ultimately enjoyable. Why? It all goes back to patterns, expectations, and predictions – three things that brains love. When it comes to music, brains are focused on identifying patterns, forming expectations, and then predicting where the song will go based off of the patterns and expectations it has identified and formed. Brains like it when they do this successfully and hate it when they don’t. This is one reason singers like Britney Spears and Justin Timberlake are so popular –  their songs are structured by patterns and expectations that are very easy to predict. When we listen to ‘Baby One More Time’ or ‘Sexxyback’ we know exactly what we are going to get.

However, groundbreaking musicians like The Bad Plus know that it is ultimately more enjoyable to hear a song violate an expectation instead of fulfill an expectation – this is why many of their songs replace the expected with the unexpected. Unlike a pop song, a Bad Plus song challenges your brain to figure out the new pattern. Many times this is difficult, and this is probably why the average listener does not give The Bad Plus a chance. But if you give your brain enough time to figure out the new pattern it will reward you. It’s like doing a difficult math problem, at first it sucks, but it feels great to figure it out, especially if you worked hard to get it.

All of this is explained by neuroscientist Daniel J. Levitin in his 2006 book This Is Your Brain On Music:

As music unfolds, the brain constantly updates its estimates of when new beats will occur, and takes satisfaction in matching a mental beat with a real-in-the-world one, and takes delight when a skillful musician violates that expectation in an interesting way – a sort of musical joke that we’re all in on. Music breathes, speeds up, and slows down just as the real world does, and our cerebellum finds pleasure in adjusting itself to stay synchronized (Levitin, p. 191).

One of my favorite Bad Plus songs, which exemplifies what Levitin is talking about, is a cover of the academy award-winning theme song, “Titles,” from the 1981 hit Chariots of Fire. Below is a video of The Bad Plus performing this song live, and there are three things that you should pay attention to. First, notice how the song begins with what you are familiar with – the Chariots of Fire theme. Second, listen at the 1:53 mark to how The Bad Plus deviate from what you are familiar with and notice that you do not find this particularly appealing. Finally, if you were patient enough to listen through the entire middle section where the band seems to get buried in its own sound, pay close attention to what happens at 5:39. Amidst a smattering of bass notes and drum crashes, pianist Ethan Iverson slowly brings back the familiar Chariots of Fire motif. The song climaxes at 6:22 when all three members strike the same chord and deliver “Titles,” as you know it.

If your brain is like most, it will love this moment. As Levitin explained, it is an instance where the brain rewards itself for being able to understand a pattern that had been previously violated – this is why Bad Plus songs are ultimately rewarding. They establish a pattern we know, they deviate from this pattern, and then they reward us by bringing the pattern back to its original state (for another good example of this listen to their cover of the Radiohead song “Karma Police”). I challenge you to listen to “Titles” several times – give your brain a chance to “get to know its patterns” so that it can successfully predict what comes next. Listened to enough times, I suspect that the 6:22 mark will eventually become extremely enjoyable.

How a musician understands and uses patterns, expectations, and prediction largely defines the quality of his or her music. Musicians who only deliver what is expected may be popular, but they certainly won’t go down in history as one of the best. It is people like Dylan, who took folk electric, or the Ramones, who introduced punk, or Jay-Z, Kanye West, and Girl Talk, who sampled other songs to create new songs, who will be remembered. Though it took audiences some time to get used to these artists, their music became celebrated once brains adapted to the new patterns e.g., electric, punk, or sampling.

I look forward to even more literature that addresses the relationship between brains and music. If the last few years are indicative, we should see many more insights.