What is Reason Good For? The Rationality-Intuition Debate 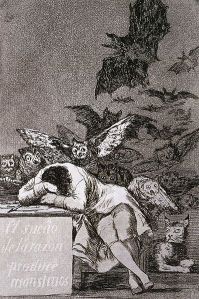 Reason is under attack. Lobbing bomb shells is its twin brother who thinks unconsciously, quickly, and with less effort; I speak of intuition of course. It’s unclear when the rationality-intuition debate began, but its empirical roots were no doubt seeded when the cognitive revolution began and grew when Kahneman and Tversky started demonstrating the flaws of rational actor theory. Their cognitive biases and heuristic program, as it came to be known, wasn’t about bashing economic theory though, it was meant to illustrate not only innocuous irrationalities but systematic errors in judgment. What emerged, which is now beautifully portrayed in Daniel Kahneman’s new book, is a dualistic picture of human cognition where our mental processes are dictated by two types of thinking: system 1 thinking, which is automatic, quick and intuitive, and system 2 thinking, which is deliberate, slow and rational. We think, as the title reads, fast and slow.

It was only in the last decade that literature on system 1 and system 2 thinking made its way into the eye of the lay audience. Gladwell’s Blink, which nicely illustrated the power of thinking without thinking – system 1 – made a splash. On the other hand, Ariely’s Predictably Irrational spurred public debate about the flaws of going with your gut. In the wake of this literature, reason suffers from a credibility crisis. Am I rational or irrational? Should I go with my gut or think things through? Questions like these abound and people too often forget that context and circumstance are what really matter. (If you’re making a multimillion dollar business deal think it through. If you’re driving down the highway stick with your intuition!). Lately though, I’ve seen too much reason-bashing and I want to defend this precious cognitive capacity after reading the following comments, which were left in response to my last post by someone kind enough to engage my blog. His three points:

With the exception of his third point, which is worth a debate elsewhere, he (or she, but for the sake of writing I am just sticking with one pronoun) captures what many psychologists believe – that our vocalized beliefs are nothing more than post-hoc justifications of gut-reactions. Jonathan Haidt, for example, uses the metaphor of the rider atop an elephant where the rider ignorantly holds himself to be in control of his uncontrollable beast. There is more than a grain of truth to Haidt’s model, and plenty of empirical data backs it up. My favorite is one study in which several women were asked to choose their favorite pair of nylon stockings from a group of twelve. Then, after they made their selections researchers asked them to explain their choices. Among the explanations texture, feel, and color were the most popular. However, all of the stockings were in fact identical. The women were being sincere – they truly believed that what they were saying made sense – but they simply made up reasons for their choices believing that they consciously knew their preferences.

There is a problem with the whole sale reaction of reason. It is difficult to explain why humanity has made so much moral progress if we believe that our deliberations are entirely uncontrollable. For example, how is it, a critic of Haidt’s model may ask, that institutions like slavery, which were for the most of human history intuitively acceptable, are now intuitively unacceptable? In other words, if we really are solely controlled by the elephant, why aren’t we stuck in a Hobbesian state of nature where life is violent, brutish and short?

One answer is that through reason we were able to objectively look at the world and realize that slavery – and many other injustices and immoralities – made society worse. As Paul Bloom explains in a recent Nature piece: “Emotional responses alone cannot explain one of the most interesting aspects of human nature: that morals evolve. The extent of the average person’s sympathies has grown substantially and continues to do so. Contemporary readers of Nature, for example, have different beliefs about the rights of women, racial minorities and homosexuals compared with readers in the late 1800s, and different intuitions about the morality of practices such as slavery, child labour and the abuse of animals for public entertainment. Rational deliberation and debate have played a large part in this development.” Bloom’s point is thoroughly expanded in Pinker’s latest book, The Better Angels of our Nature, where Pinker argues that reason led people to commit fewer acts of violence. In his words: “At various times in history superstitious killings, such as inhuman sacrifice, witch hunts, blood libels, inquisitions, and ethnic scapegoating, fell away as the factual assumptions on which they rested crumbled under the scrutiny of a more intellectually sophisticated populace. Carefully reasoned briefs against slavery, despotism, torture, religious persecution, cruelty to animals, harshness to children, violence to women, frivolous wars, and the persecution of homosexuals were not just hot air but entered into the decisions of the people and institutions who attended to the arguments and implemented reforms.” In regard to my commenter’s first point – that conscious talk is trivial and epiphenomenal – I think there should be little question that reason played and plays an important role in shaping society for the better and that it is certainly not trivial or epiphenomenal as a result.

His second point – that reason is all post-hoc justifications – is also problematic. Although conscious deliberate thought depends on unconscious cognition, it does not follow that all reasons are post-hoc justifications. For example, solving math problems requires unconscious neurological cognition but nobody would ever say that 1+1=2 is a post-hoc justification. The same is true of scientific truths; are Newton’s laws likewise post hoc justifications? No. This is because there are truths to be known about the world and they can be discovered with reason. As Sam Harris explains, “the fact that we are unaware of most of what goes on in our brains does not render the distinction between having good reasons for what one believes and having bad ones any less clear or consequential.” Reason, in other words, separates correct beliefs from incorrect beliefs to justify truths from falsehoods. It requires unconscious thought as neuroscience now knows, but it does not follow that everything our rationality discovers is a post-hoc justification.

So, let’s not forget that one of our species’ most important assets – reason – is a vitally important cognitive capacity that shouldn’t be left by the way side. Psychologists have done insightful work to demonstrate the role of the cognitive unconscious but this is not to disregard the power of human rationality.

Tags: intuition, Jonathan Haidt, Psychology, Reason, system 1 and system 2 thinking
From: Uncategorized
← Our Modular Selves: Science and the Philosophy of Self
A Brief Guide to Embodied Cognition: Why You Aren’t Your Brain →
12 Comments Post a comment