Odysseus And The Science Of Willpower 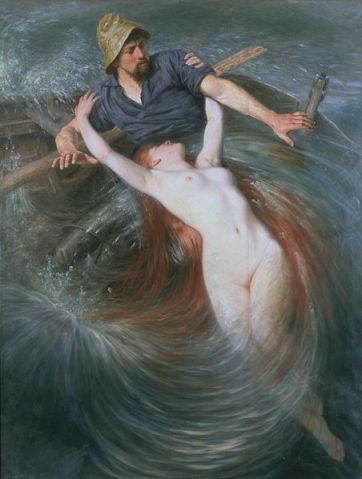 If you paid attention in high school you might remember the story of Odysseus and the Sirens. After the Trojan War ended, Odysseus went on a protracted sea voyage back to Ithaca. At one point he realized that his ship would pass by the island of Sirenum scopuli, where the enchanting Sirens sang melodies to seduce the “weak” human mind. In his genius, Odysseus had all his men fill their ears with beeswax and tie him to the mast. It worked. They sailed on by and the rest is history.

Ever since Adam and Eve ate the apple, humans have had trouble with self-control. But if there is one lesson to learn from the psychological research it is that Odysseus had the best strategy: it’s the people who avoid tempting situations altogether – the ones who take a different street so they don’t have to walk past the ice cream shop – who exhibit the highest level of self-control.

This was originally demonstrated by the psychologist Walter Miscel who is famous for creating what is known as the Marshmallow Experiment. Conducted back in the 1960s, Miscel invited four-year-old children into a tiny room, containing a table and a chair, and offered them a deal: They could have one marshmallow now or they could wait a few minutes and have two. Most kids took up Miscel’s deal only to give into their impulses 30 seconds later. But some did not, and Miscel’s important discovery is that the kids who waited didn’t have more willpower, they “simply found a way to keep themselves from thinking about the treat, directing their gaze away from the yummy marshmallow.” They didn’t tie themselves to the proverbial mast exactly, but they did find a way to distract themselves from the situation.

A similar experiment recently published by Wilhelm Hofmann, Roy Baumeister and Kathleen Vohs demonstrates complementary results. The researchers equipped a couple hundred participants with Blackberries for one week. Seven times a day the participants were beeped and asked to report if they were experiencing a desire now or in the preceding 30 minutes. They also took note of how strong the desire was, if it was an internal conflict, if they attempted to resist it and how successful they were. Here’s the BPS Research Digest explaining the results:

The participants were experiencing a desire on about half the times they were beeped. Most often (28 per cent) this was hunger. Other common urges were related to: sleep (10 per cent), thirst (9 per cent), media use (8 per cent), social contact (7 per cent), sex (5 per cent), and coffee (3 per cent). About half of these desires were described as causing internal conflict, and an attempt was made to actively resist about 40 per cent of them. Desires that caused conflict were more likely to prompt an attempt at active self-constraint. Such resistance was often effective. In the absence of resistance, 70 per cent of desires were consummated; with resistance this fell to 17 per cent…

People who scored highly on a measure of trait self-control had just as many desires, but they were less likely to report experiencing internal conflict; their desires were generally weaker; and they attempted to resist them less often. These findings are revealing. It’s not that people with high self-control have saintly willpower, it seems. Rather, they seem to avoid putting themselves in situations in which they are exposed to problematic temptations. “The result is not a desire-free life,” the researchers said. “Au contraire, the result appears to be that they mainly have desires that they can satisfy.”

Like Miscel, the researchers found that everyone possess inner demons but it is the people who are smart enough to avoid situations that trigger their inner demons who command higher levels of self-control.

The exciting part of the science of self-control and willpower is that it is now being understood at the neurological level. In 2004 neuroimager Jonathan Cohen and the psychologist Samuel McClure teamed up with the economists David Laibson and George Loewenstein to study how the brain reacts to short-term and long-term rewards. They had participants lay in a scanner and pick between a small reward – five dollars – which they would receive in the near future and a big reward – forty dollars – which they would receive several weeks later. How did the brain handle the two options? Did the brain handle them differently?

They found that choices that tempted the possibility of immediate gratification lit up the striatum and medial orbital cortex, which are more associated with the automatic and emotional brain. All choices lit up the dorsolateral prefrontal cortex, a part of the frontal lobes associated with more rational and deliberate thinking. This finding isn’t too surprising. Ever since Phineas Cage’s freak accident, which sent a spike through his orbital and ventromedial cortex largely destroying his frontal lobes, scientists have known that self-control is closely tied to frontmost parts of the frontal lobe.

It was likely these parts of the brain that were most active when Odysseus gave his orders. It is makes sense, then, that he was known by epithet Odysseus the Cunning; he must of had large and fine-tuned frontal lobes! Although it is probably impossible to resist every delicious temptation out there, we can, like Odysseus, find ways to counter our weakness of will by avoiding certain situations altogether.